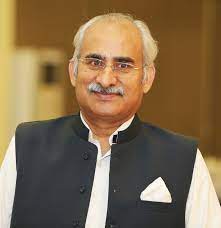 Hameed Shahid is an Islamabad-based fiction writer and literary critic. His first writings were published while he was still at school and his first book was published when he was a university student. Hameed Shahid has authored several collections of short stories, a novel, and literary criticisms. His short fiction has been anthologized nationally, internationally, and translated into several languages. He has also translated global fiction and poetry from English into Urdu. His recent books are “Gandam Ki Mehk” (fiction) and “Intekhab Ghazaliat Mir”. His book “Dehshat mein Mohabbat” was nominated for both the 6th UBL Literary Excellence and Karachi Literature Festival awards (2016) and was declared a winner at the UBL Literary Excellence Award in 2017. He received Tamgha-e-Imtiaz from the President of Pakistan in 2017.